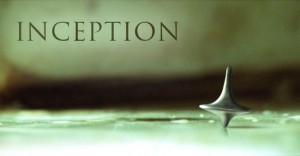 Last nite I got the time to watch the movie Inception with the wife – finally. I wanted to see what people are so raving about. Over the last 2 weeks, I have been hearing that Inception tops both singapore and usa box offices. But before I get on about the movie,

IF YOU HAVE NOT WATCH THE MOVIE AND AM GOING TO, DO NOT READ THIS FURTHER.

YOU HAVE BEEN WARNED.

The movie started with with Di Caprio washed up on a beach and was apprehended by some chinese men for they found a gun and a top on him. He was brought to the “emperor” who asked him point blank, are you going to kill me.

The scene cut into another where Di Caprio with 2 other accomplices went into a state of unconciousness with a chinese mn – played by Ken Watanabe. Watanabe was helped captive. Di Caprio was sent by a big corporation to tap into the mind of Watanabe to dig some trade secret. As the plot goes, it didnt work.

Di Caprio and his friends had to flee before the big corporation get to them but they were intercepted by the Watanabe who offered him the possibility of returning to america to see his children. You see, Di Caprio had committed a crime – which was later revealed that he had killed his wife.

The job was to get into another corporation successor’s head and plant an idea to break the company the father had built so that Watanabe’s company would gain a foothold in the energy market.

So Di Caprio recruited some kakis and got to work. Di Caprio is haunted by the death of his wife. Apparently, both him and his wife had experimented in dream state and Di Caprio brought them into several levels of dream within a dream. It became confusing that the wife doesnt know how to differentiate between reality and dream land. One has to have a totem like the spinning top. A top that continues to spin will mean he/she is in a dream.

If one is killed in dreamland, he/she will be awake in real life. So the wife wanted to die so that she can wake up into the real world. She did commit suicide but blame it on Di Caprio. The reason…u have to watch that yourself.

Anyhow, after elaborate dream states, and fights etc, they got to accomplish their mission…or did they?

Things I Know and Some Questions
These are the things I know and some that i find questionable or may have missed the point especially when trying to figure out what Watanabe was mumbling about. Subtitles were in chinese.

Characters in dream land are projection of those who are executing the dreams. Therefore the crowd that went amok and the gun fight were projections of both captives.

To get out of a dream, one is to be killed in the dream.

The old watanabe was in a state of limbo as he was killed in the 3rd level of the dream. If that is so, why is watanabe old and di caprio was not when he was apprehended?

If in the first dream state, Di Caprio stopped his colleague from killing Watanabe  because it would have placed him in a state of limbo – dreaming in infinity, in the end, did the old Watanabe killed both of them to reach back to reality?

Why was gravity needed for them to get back to reality?

Finally, did the top stopped spinning in the end?

Conclusion
Overall it was a superb movie. They should have done it in 3D so that we could experience the manipulation of objects in the dream especially when everything exploded.

The plot is thin really. All the trouble to get a kid to break the company. They could have just shot him and with no power of attorney, the company would be in a limbo.

The sub plots were much more interesting. At one point, I was thinking how the hell they going to do it then I remembered that this was a movie, so it had to end some time.

You really need to pay attention and listen to the dialogue as it explains what is going on as this is totally whooooffff over your head. But it is not so blatant as CSI to have explained everything they are doing.