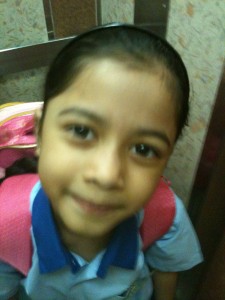 So the day finally came. Amira, my only daughter, so far, went to primary school. She had been very enthusiastic about it since her kindergarten ended last year.

This was in november 2010! The night before school started she cried. Amirul came to tell me that she was crying and he doesnt know why. Then mum came out to tell me that she was crying because there was no art period on the opening day of school! She must have felt excited with the new water color, clay, brushes and drawing block. So she must had been sad that there was no art. “Tomorrow morning I wake up I will do some art.” She said before she fell asleep. How time have changed.

Morning of the first day of school

Amira was busy and upbeat the next morning. Mum and daughter had personal time having breakfast at Mac. The mum was already in tears as daughter was going to school already. I remember the first day Amirul went to school. As he climbed the stairs, lugging 10 kilos over his shoulder, swaying left and right to assemble in the school hall, the mum was already tearing, hands reaching out with loud violin sound in the background, singing hindustani song in the rain, drenched, …aaaahh aaaahhh, aaahhhh aaahhhhhh, terkebil gusi, termakan gam…

For those who cant get enough of Amira, more of the same are in youtube. Search for “Amira Sufya”.

We arrived at school at about 12.30pm. I alighted the mother and daughter while I went to park the car. When I arrived at the school, Amira had already line-up with the other kids! I didnt get to say goodbye! I couldnt see where she was sitting to even wave and sing Kuch Kuch Hota Hai!

You know how your parents always say to you “When you have kids, then you know”, whenever you did something wrong? And that moment I felt it.

When i reported for my NS at depot road ancient ago, we were whisked into a room to say the pledge. Immediately after the pledge, we snake our way to the car park to board the waiting three-tonner (YES THREE TONNER. NO AIR CONDITION BUS LIKE THOSE TODAY!) All the parents sat at a stadium like seats looking on as we board the truck. There was no last moment of hugs and goodbye. I just wave at my parents from afar. I didnt think much of it. After I booked out 2 weeks later, I found out how semi-distraught mum was. “They just took you away from me” was what she said as she hugged tightly. 22 years later, I understand what that meant.

We were shooed to the hall for a school talk. The principal started by saying;

“There will not be exams but your child will be tested at the end of the term.”

Oxymoron. Pfft. I was not happy about it. They are just procrastinating the eventuality. When Amirul was in primary 2, every punctuation missed was punished.

“We have to prepare the kids for PSLE. This is how they will be graded.” the teacher said.

He got 98 for his maths that year, was good enough for a 99, but no, they wouldnt give that one mark to motivate him further. Rather, they said;

“They have to learn that it is a mistake now.”

As I elaborated in a post, find a way to eliminate PSLE before doing away with exams.

At 2.30pm I was able to see Amira as she had her recess. She was happily gobbling her mee soto. Hmmm sedap…Dont trust me? Here look – errrrr go find;

There’s more where that came from. Look for “Amira Sufya” in youtube.

Abah : “You made friends?”
Amira : “Yes, my best friend is Seri.”
Abah : “So fast best friend? How come?”
Amira : “Because she is malay and have long and plaided hair like me.”

Abah : “Your buddy help you buy food?”
Amira : “I ask her what food there was. She said got Mee Soto. I straight away said I want Mee Soto.”
Abah : “She bought for you?”
Abah : “She wanted to but I told her that I can do it myself.”