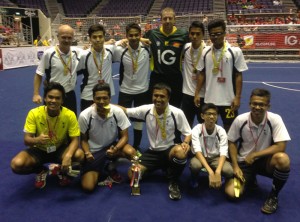 So the Spurs Fan Club won the Football Fans Indoor Stadium Cup. A total of 7 fan clubs took part in this mini tournament which is jointly organised by D2D Sports. The preliminaries which was league based saw the following standing;

The semi-finals see Liverpool vs Chelsea and Tottenham Hotspur vs Arsenal. Chelsea saw off Liverpool although liverpool had taken an early lead. Spurs beat Arsenal 2-1 in a pulsating match. In the final, Spurs beat Chelsea 2-0. A goal assisted by yours truly. Old man u know. We just lay off.

My son Ahmad Amirul Ariffin took snap videos of Tottenham Hotspurs Singapore Fan Club games. Unfortunately, he didnt get the goals scored in the Ars*nal match but did get the ones against Chelski. And a nice video he created in the end.