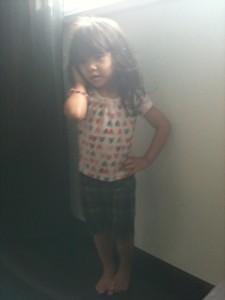 Ivi standing in our favourite corner on the phone with me.  She was complaining or asking about amira, her mummy, the tv and bunch of other things. Aiseyman, you know, a whole day of stuff have to be reported. Oh yes, it was accumulating since the day before, we didnt talk.

According to the father, she was gesticulating while talking. Macam lah pakcik ni nampak. Nevermind, I have my own Farah Fawcett.