So finally Jaffar of Batu Pahat decided to wed on the 19th March 2011. It was long time coming and we were all eagerly waiting for it. We feel so happy for him and especially for his mum, Mak Hitam, who finally gets an in-law. She is not getting younger and often falls.

We were told of the wedding late and I wanted to be see him before it happens because there wont be time for banter during the wedding ah kan. So the saturday before the 19th, I made a call to him and asked if he was around for the day. He was half asleep and said yes. I said ok I will see him later. I told the wife who was dressing up to meet a friend that I am going to BP. She paused for a moment. “Are you serious?”

“Yes, yes I am.” I said using Amirul’s usual replies. So she twirled her shawl the other way and off we went. 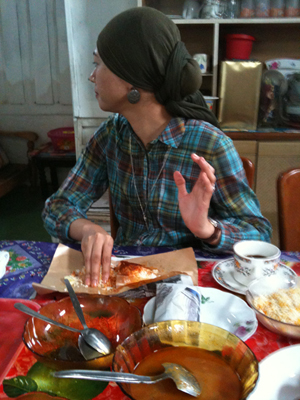 I arrived to see that he wasnt around. Made a call to him, “Halo? Orang singapore datang, orang bp keluar?” (We are here and you not home?)

“Alamak! Betul ke ni?” (You sure?)
“Ah ah, ada roti canai, roti and planta, kopi and teh…” I was describing wat was on the dining table in the kitchen.
“Wah! dengan pantas sampai! I thought later means tomorrow or next week. What you want to eat?”
“I want asam pedas kepala ikan.”
“Ok, im heading home.”

He arrived home half and hour later. He thought that I was joking. He said that after I called him, he had secretly called his brother on his handphone to confirm and then a while later, called the house phone to speak to another brother.

Oh and yes, it was also during this time that I thought I lost Amira. She had a madrasah trip and the brother couldnt find her at 12pm which was the time she was suppose to be back. However after making some calls, the bus will only arrive at 12.30pm. So all was well in the end. I was already preparing search and rescue teams as I was two hours away from scene.

And I apologise for not taking the photo of the asam pedas kepala ikan. Too good to waste time.

Wedding day
The following saturday, we made haste again to Batu Pahat. We were about half and hour behind schedule as we had to take amira’s passport which was inenvitably swapped with ili’s. So I had to go all the way to tampines to take it and then made my way back to pick up wife and bak and then pick up Pak Busu and Mak Chu. We arrived at 2.30pm, half and hour behind my original schedule. It rained when we arrived, probably cry of joy because Jaffar finally got married. I took a simple video of the happenings.

After that we were invited to a relative’s farm over at Sedenak. So we made our way there. It was an exciting trip into the farm. First there was road, then stone, then sand. It got narrower as we got further in. There were no lamp post and we were wondering what happens when it gets dark. There were only a few houses, liveable houses.

When we arrived, we saw that most of the relative from the wedding were there. They were enjoying the spread and DURIANS! It was a big farm. And being a typical urban singaporean, we were all in AWE! For the first time, I saw the bud of a durian. How small it is. Anyway, I have to fetch mom. I leave videos for you guys to enjoy and also one of mother in laws forte in speaking with animals.