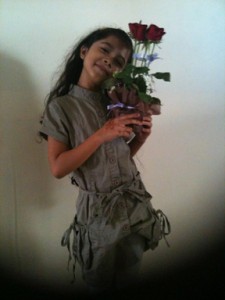 Amira, your daddy am cool about it. In the space of 10 days, mami zizah got married and you graduated to primary-hood. No problem. Abah am cool. Calm. Relax. Ahem.

Your enthusiasm was a cause of concern for me. I know what your expectations were. I know were bringing your wonderful memories of school and teachers from Darussalam Mosque nursery and kindergarten to public school. Thus I am afraid that you might be disappointed. Do you know how much excitement you showed in the last few days before school open? How in heaven’s name am I able to keep your enthusiasm up throughout 6 YEARS!!! Your baijan, Amirul, didnt show this. He was chilled throughout. You know mr cool, just get on with it kinda thing.

You know what happened the night before school? You cried. Your brother came and told me but he couldnt get you to tell him why. I told him to try harder. I had to because soon it would be you and him in school. Both of you had to look out and take care of one another.

Do you know why you really wanted art on the first day? Because you were nervous. Nervous of the surrounding and nervous of the new teacher. Nervous at the memories of baijan getting barked at by me when doing school work. ahem. Nervous at how this primary school life was going to be. When you first joined nursery, you cried. You clung onto my thigh throughout the assembly and I had to be assertive when you went into class – only to cry once again after seeing chu’s face at the door!

This was evident when we were late for the school orientation on 20th November 2010. The teacher in charge then told us that you cried. I asked you why and you said that you missed the part where the teacher informed the kids about where the canteen was.

So before we left for school on the first day, you told me that you wanted ummi to bring you in because you were worried that I might make you late – reliving the orientation experience. HALLOOOO!!! I had to park the car first my dear. pfft. When I arrived in school, you had gone to be with your “friends”. You left without waiting for me, without giving me a hug. I was sad. I had your Pak Long for company. I do not think I want to cuddle him instead. So its not only you who feel insecure, the parents too. Not me, Im cool. Ahem.

So I eagerly waited for your recess time. When it came, all the parents rush forward. It was like a mad sale of cheap iphones! I got a spot and whipped out my iphone video and recorded you slurping down the mee soto. And another thing, you were suppose to follow the buddy and not the other way round!

The second day, you woke up early as usual. Excited. Also because your mum wanted to tie your hair before she left for work. After which, you took out your water colour and painted a picture of a girl’s face winking in the center. Around it, you painted the words like “Miss Tay, you are the best teacher.” !!!!!! ITS ONLY THE SECOND DAY!!!! How would you know she is the best??? I should have taken a picture of it. Anyways I asked you later after school whether you teacher enjoyed the painting. You said;

“I had to fold the painting in two because it was too big for my bag. I gave it to teacher.”

“She said she will look at it later and told me to sit down.”

HOW FREAKING LONG DOES IT TAKE FOR YOU TO FREAKING UNFOLD THE DRAWING BLOCK AND SEE WHATS IN IT????????? Sheesh

This school thing is bringing me sometime happiness, sometime sadness. I hope you were not disappointed about your teacher’s action or inaction rather. I told myself that I had to find the time to talk to you about life in public school.

I enjoyed watching you during recess time, how the buddy tailed you around, being bossed by you. On the third day, you had cereal. Once in a while you waved at me as I was taking a video of you. After you were done, you came to me. We hugged and kissed. You look at me and said;

I watch you telling the buddy that you wanted nasi lemak. Do you remember how big her eyes were when you told her? Anyways, you got your nasi lemak, sat down and ate. In between munching, you were talking to your buddy. Another spoon into the mouth and you looked up, watched the day goes by. Another munch, you waved at me.

???????? I was profusely looking at the watch. Animatedly gesticulating for you to hurry up munching and eat. I do not know whether you saw me or not. I got hold of baijan, who himself was performing buddy duties, to tell you to hurry up. He got up, look at his junior, immediately scoot over to tell you, and then scoot back. I suppose they are on the instruction not to leave the juniors alone, even for a second.

Somehow you finished your meal before time. I suppose being the first few days, the school extended recess by another 5 minutes – so that the parents could have their last look, hug, preparation whatever. I was guilty all the same. This was the final day that I get to see you in school. I remember feeling helpless. How are you going to cope in recess all alone? You can buy the food on your own? Did the clementi sarbat training served you well?

That night, as I tucked you in after a game of UNO, you spoke a lot about your school and your friends. How Seri is your best friend because she was malay, had long hair and plaid like you. Also because both of you got your school shoes from Johor.

Also you had another best friend by the name of Nur Abilah, something like that. Because she waits for her parents or siblings to fetch her like you do as Seri takes the school bus home. Got part-time best friend ah?

You were getting sleepy by then. So you said your usual;

“Abah”
“Yes”
“Tomorrow will be very quiet.”
“Why?”
“No parents around. So the canteen will be quiet.”